HONO's Series A - For The Promise Of Productivity & Happiness


Our AI-backed innovations are all set to go places with Series A funding from leading investors including Aakash+BYJU’S Aakash Chaudhry. It’s a milestone to a great a beginning.

It’s a moment when we can allow ourselves to feel a little chuffed: We, at HONO, have won the support of investors, known for their foresight and acumen, with our Series A funding. These include Aakash+BYJU’S Aakash Chaudhry, besides individual investors: Hemant Sultania, Amit Khanna of Amaya Ventures, and Harsh Gupta of Udayat Group.

This Series A investment will leapfrog our technology innovations and will accelerate our expansion across India, MENA & SEA.

We also see it as a reiteration of the faith that our clients have shown in HONO’s signature AI-based platform, which promises productivity and happiness - measured, mapped, and delivered through custom HR processes.

“HONO’s emphasis on technology, particularly AI to address, simplify and humanize end to end HR processes being a single source of truth and its ability to transform HR into a productivity driver is something we believe in. We expect HONO’s growth curve to show a much steeper rise hereon. Besides, we value the strong and constructive relationship with HONO, developed over years of association with them as a client. We believe in working with brands that are committed to revolutionising the industry. And HONO’s vision, its client centricity, and its high-end solutions show that promise.”

Of the USD 5 Million of the Series A funding received by HONO, Aakash Chaudhry has invested USD 4 Million, while USD 1 Million has been championed by Hemant Sultania, Amit Khanna of Amaya Ventures, and Harsh Gupta of Udayat Group.

It has been a resounding confirmation of HONO’s vision of happiness – and productivity. Our ability to measure, analyse and modulate mood and sentiment within businesses, and accelerate productivity through our unique AI-powered platform across the entire employee life-cycle has been a forward-looking innovation, which anticipated and readied itself for the workforce and business challenges faced by the industry today. And our Series A has been one big nod to it.

“Having Aakash Chaudhry and our new group of investors in the fold, makes the HONO journey even more exciting. Their presence and this strategic investment not only establishes our investors’ faith in the business but also reinstates our belief and the belief of the market in the direction HONO is evolving. We have, for years, been advocating that future-readiness of HR or organization lies in their use of data towards better productivity and happier people. And for that to happen they need to have a single-source-of-truth backed by truly smart systems. With this new impetus, we will be able to take this farther and do it globally, at scale.”

With these new winds beneath our wings, we now intend scaling the business and our sales vertical, and to add 800 new clients in the next one year, aiming to support about 5 million people on the HONO platform in the current FY 23.

It also means that our flagship products will see further tech innovations and strengthening of our promise to deliver on a more evolved AI-backed predictive engine. 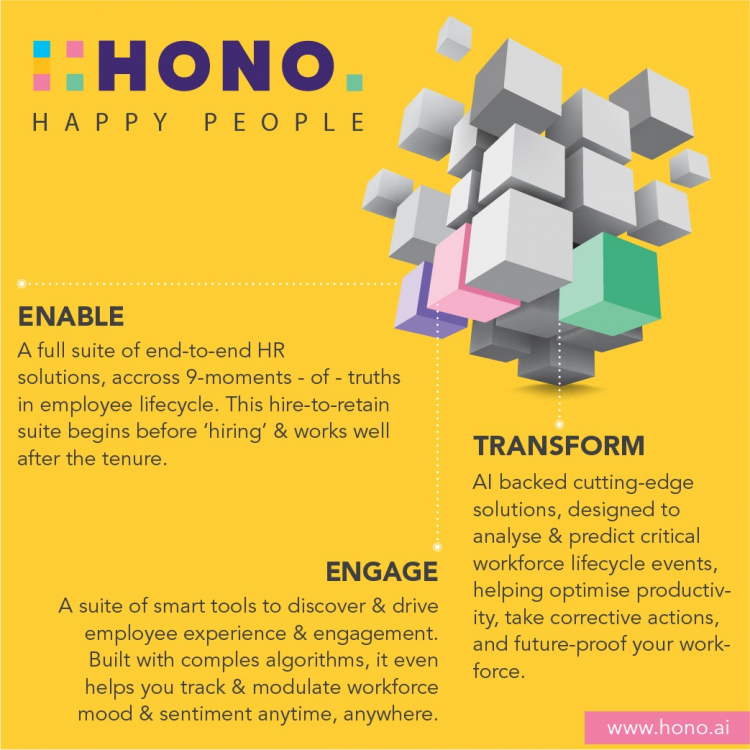 We pride ourselves as not just a company, but as a team on a mission to deliver within the workspace, man’s greatest endeavor – the pursuit of happiness.

And we thank both our investors and our clients for their sustained faith in it.

The Buzz in Media