Happiness At Workplace: What Does It Mean Now?


We ran a survey online over social media, across platforms, to understand what most defined happiness at the millennial workplace - and the results were surprisingly NOT 'better pay' - something organisations tend to see as a universal remedy to employee retention problems. Since the question of happiness at work is so closely connected with productivity, we took a closer look at the results and the meaning of happiness at modern workplaces. 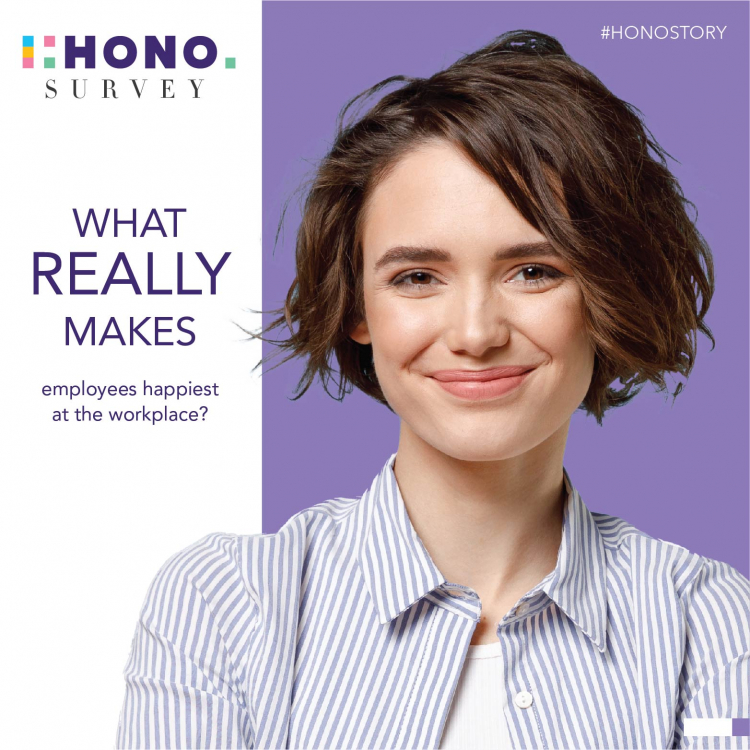 How often do you get to see this expression in your workplace? The link between this and a productive workspace is much deeper than one thinks.

When running the HONO Happiness Survey (run across social media platforms), there were two schools of thought among our analysts: the cynics and traditional thinkers believed firmly that no matter what, most respondents would vote for ‘More Pay’ since that is the primary transactional promise between an employer and an employee; the radical thinkers, on the other hand, believed that most respondents would vote for ‘More Leisure’, since the contemporary workspaces tend to be extremely demanding of employees (the post covid work-from-home has made average work days interminably long). Both were in for a surprise. 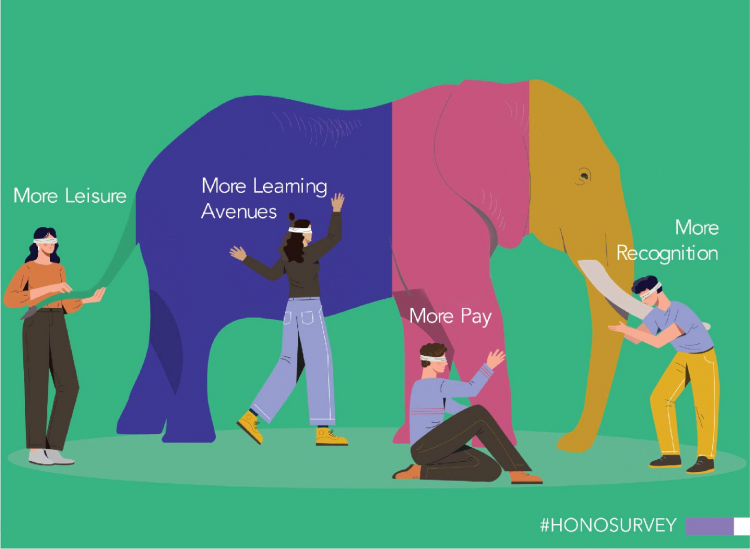 The definition of happiness changes with time, space and context. Our survey aimed at trying to get a holistic indication rather  than looking at one source of happiness.

Evidently, the millennial employee (at least those who responded) doesn’t seem desperate for more leisure – only 8% of the respondents choosing leisure over other options; instead, the millennial employee seems hungry for ‘more learning avenues’ – with 48% of the respondents choosing this option. ‘More Pay’ did receive 26% of votes, but it was a distant second. ‘Recognition’, which most social scientists believe to be as powerful if not more powerful than the impetus of money, received only 18% votes. While the sample size was of 920 unique votes, the voters were an eclectic mix, across all levels of various modern offices, and are a fairly representative sample of the millennial employee.

Interestingly, the choices made, and consequently the definition of happiness appears to be different across levels. For instance, most of the votes for ‘higher pay’ did not come from junior level respondents but from middle and senior level personnel, while votes for ‘more leisure’ and ‘more learning avenues’ were largely from junior personnel.

This should be a clear sign to businesses across India and the world to smell the coffee and to begin looking beyond the obvious and to understand that happiness at work is not a fixed notion and that it is shifting and changing with time and with changing priorities.

Why Understand The Notion Of Happiness In Workspace?
A deeper understanding of the notion of happiness in the workspace is important not as an academic exercise but simply because employee happiness has a deep link with business productivity.

HR departments that have the wisdom and pragmatism to look beyond the management of human resources as any other resource has managed and acknowledge that humans as resources feel and that feeling has a direct impact on what they do and how they do it, are the ones that will take the trouble of finding ways to tangibly measure this happiness, and then to find technologies or processes that can help modulate this happiness for better productivity.

Economics – a subject closer to the market – already works with the concept of a happiness index, which uses subjective and objective measures, and is defined as the weighted (by sampling weights) rate of respondents reporting “Very happy” or “Quite happy” less the weighted rate of respondents reporting “Not very happy” or “Not at all happy,” plus 100. When countries are being ranked by the use of such happiness indices, there is no reason why businesses should not follow suit.

Contemporary research and writing have clearly demonstrated the impact of happiness on productivity: Shwan Achor in The Happiness Advantage (2011) asserts that a company with happy employees could increase sales by 37% and productivity by 31%, and that happiness directly contributes toward building a high-performance work environment and improving the quality of life for the people engaged with the workspace.

Further, a University of Warwick study has found that happier employees are 12% more productive, while unhappy employees are 10% less productive. The study inferred the same - that human happiness has a significant positive effect on productivity.

In the same vein, a study on organizational success by the iOpener Institute reveals that employees who feel happy in the workplace are 65% more energetic than employees who don’t (iOpener Institute, n.d.). These employees are two times more productive and are more likely to sustain their jobs over a long period of time.

While standardizing the methodology of finding the ‘meaning’ of happiness at workplace across levels, across geographies and across cultures and measuring and modulating it has always been the road to productivity less trodden, today it is no more an option, but an imperative.

The reasons are clear: there was a time when businesses could afford to be complacent, and any talk of employee happiness as an important KPI for business success could be written off as a fancy theory from bleeding hearts, simply because businesses were not experiencing significant turbulence in employee retention or new employee hiring or productivity rates. Any entropy of the workforce was easily correctible by the usual measures of pay hikes, bonuses, hiring drives, and the likes.

Pressing Questions For HR & Businesses In Post-Pandemic World
But the pandemic changed it all. An extended period of exposure to ‘home’, a sudden awareness of mortality, a realization that alternate work methods exist and can work, a reprioritization of life-goals – all of this has resulted in the largest wave of resignations ever witnessed by the business world after the Industrial Revolution. And the return doesn’t fit in with the big quit. Businesses are struggling to hire, leaving the market asking the questions – what has changed? And what do potential employees want? What makes them happy at the workplace?

Not all businesses have woken up to these questions today; there are some who have had the foresight to have at least addressed the issue if not solved it before the problem became a market reality.

Google and McDonalds have made happiness a part of the performance culture. They even have people designated as Chief Happiness Officers (CHOs), with the job of spreading positivity and the responsibility of maintaining motivation in the workforce.

In 1999, much before Google employed their first CHO, Chade-Meng Tan, a leading French fashion brand Kiabi hired a professional as their Happiness Officer. That was one of the earliest advancements in the field, and after the massive success of Google and their motivational CHO Meng, recruiting happiness officers became a ‘culture’ for companies in different sectors (Cooper & Robertson, 2018).

The Project Of Measuring Happiness At Workplace
Measuring happiness is not as ambiguous a project as it appears. As mentioned earlier, it has been feasible to measure happiness of whole nations (under the Happiness Index).

In “A Strategy For Measuring Employee Happiness (And Acting On The Result)”, David Tomas mentions the Traffic Light Survey method as an effective strategy for measuring workplace happiness in employees (Tomas, 2015).

The test is conducted by asking three simple questions to the employees, answers to which provide insight and immediately redirects the focus onto oneself. The questions are:

- What mood did you arrive in today?

- What mood are you leaving in today?

- On a scale of one to four, how much did you like the tasks you did today?

The Traffic Light Survey is easy to administer and motivates the employees to express themselves, state their opinions and strive for true happiness in the workplace. 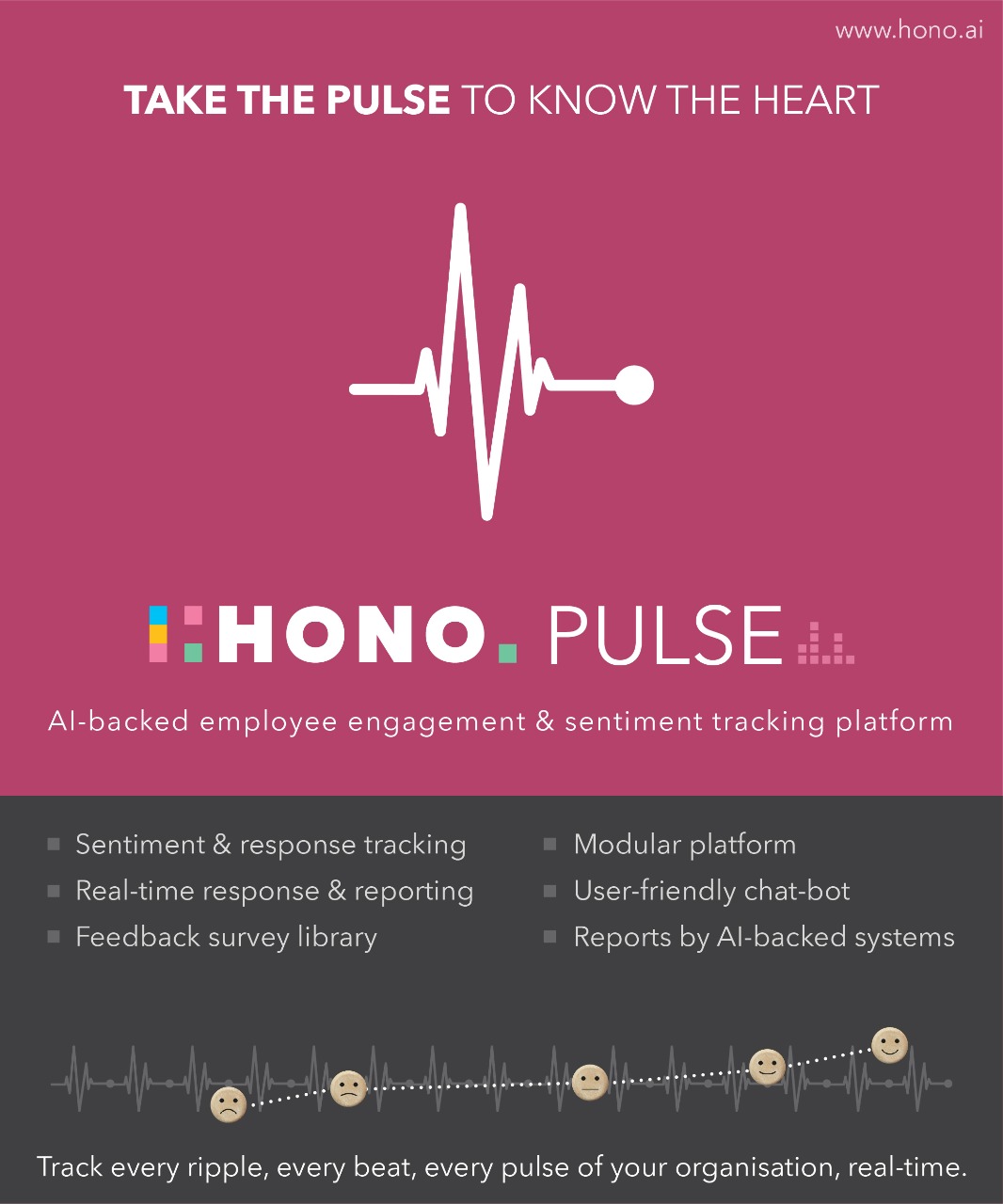 Happiness At Work: There are multiple triggers and factors that decide this happiness.

Despite all the available digital tools and advancements, businesses are still not showing the urgency needed to bell the proverbial cat. Often the reason boils down to simply not being able to see a clear measurable link between ‘happiness’ and ‘productivity’.

The Link Between Happiness & Productivity

Research on the subject, however, has shown conclusively that ‘happiness’ is indeed a significant factor in impacting productivity and work, positively. The role of productivity in enhancing workplace happiness has been indicated in several studies (Sheldon & Lyubomirsky, 2007).

Caleb Papineau (2017), author of Tinypulse, has insightfully illustrated a model of how workplace happiness is related to and is improved by productivity and creativity. His statistical analysis reveals that

- Lost productivity among workers cost around $1 trillion globally, which is a shocking revelation for the world economy

In studies by Kansas State University, researchers found that when people were happier, they demonstrated better decision-making and job performance. They also enjoyed higher levels of physical and emotional wellness which reduced business costs. They were also more likely to remain with their employer, reducing the costs of hiring and training. The effects of happiness on these outcomes were true regardless of age, gender, ethnicity, job tenure and educational levels.

Similar studies at the University of California Riverside have found that positive moods of happy people contribute to the people working harder to achieve their goals, and towards learning and capability development. In addition, their confidence, optimism and energy tend to make them more likable which works to their favor even outside the workspace.

An interesting relationship between autonomy at work and happiness has been established by other studies. Research by the University of Birmingham found that when employees report greater control over their tasks and schedules at work, they also report greater levels of wellbeing and job satisfaction. This aligns well with our essential premise that human beings as business resource are different from – say ‘natural resources’ (like oil or wood) or ‘mechanical resources’ (like machines and technology) on primarily two accounts: they are sentient, and they have agency. And both impact each other. 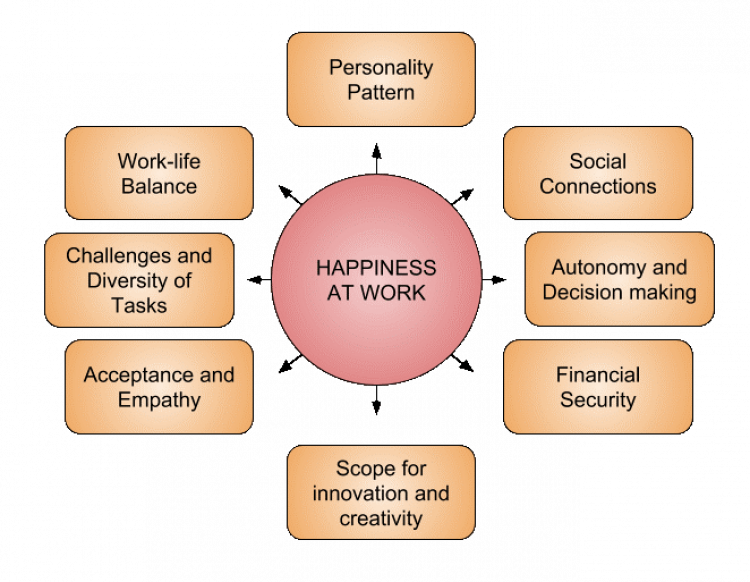 After the swinging 60's, when counterculture triggered a whole generation of employed professionals to question their notion of happiness as material benefits (money, cars, houses), and led them to give up their jobs in favour of an iterant lifestyle, it is for the first time that the question of happiness has taken centre-stage again.

And this time, in the post-covid phase, employees are looking for personal growth (read - learning, widening of skillsets and developing more meaningful abilities) and social usefulness as a source of work-joy. With the question of happiness at work being so closely connected with productivity, and the meaning of happiness at modern workplaces in a state of flux, it would be at their own peril that a business would ignore it. It deserves as much if not more attention as is accorded to the revenues a business makes, and along with the P & L, begs the standardisation of a happiness index, which can be used by organisations and people seeking to join them, alike.

To me, what best encapsulates the weltanschauung of happiness at work is the Danish term Arbedjsglæde, which means the happiness that we derive from ‘doing’ something. It is an emotion, a sense of well-being that comes when we feel good about the work we do when we feel involved in the ‘professional commitment’. A word well worth remembering, and a meaning well worth making the centerpiece of any modern workplaces.